In 1985 West Germany teeters on the brink of defeat. The American V Corps is all but crushed, and Soviet armored formations rush to the French border. In a small town near the North Sea, a temporary POW camp holds hundreds of NATO soldiers, not all of them human. A handful make a break for freedom, unaware of the horrors that await them.

Welcome to Mark Walker’s Dark War: a roleplaying and skirmish game based on Mark's popular Dark War: Retribution novel and set in the midst of World War III. A game thundering with authentic skirmishes, and screeching with the bone-chilling cries of the dark entities unleashed by the war’s massive bloodletting.

What's New?
A lot, yet not so much. The core game, which we think is a blast, remains unchanged. We did, however, add a monetary system, additional spells and gear, and about 15,000 words of backstory. If you didn't understand the Dark War universe before, there's no excuse now.

That's not all. We illustrated completely new standees (or lay-flat counters, depending on how you use them), enhanced the map, added (as we alluded to) over a dozen new pages and several new pieces of art. We want to make this a great RPG and SKIRMISH game. We feel that we have done our part, now all you need to do is play!

Dark War uses a simple system, based on a single rule. Anytime you role a 4 or greater you get a success. That success might mean you pump two AK-47 rounds into a werewolf, or that your nurse heals a team member, or a witch gains control of a weak-minded soldier, forcing him to fire on his comrade. What varies are the dice that you use. For more information and to order from our partners at Tiny Battle Publishing, click here. ​

My quasi-daily blog on anything that catches my fancy. 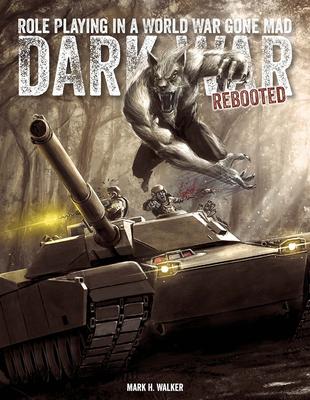